"Look, I'm sorry but it's the only Plasma Planet nearby, and I need that Enriched Uranium for my new project."

"Really Numen? Hardship? I pay you for all the planetary commodities you bring me! You have enough ISK to replace your hauler even without my help! And these new orders will actually pay out more than your old ones did anyway!"

"Yeah, that's what I thought. #Erun glances at Pali# Look we'll sort out the pricing when you bring me the first load of goods, Pali got impatient and started recording without me. And no you can't have him, make your own autonomous Neocom interface. It's not my fault you focused your studies in school on astrogeology and laser physics."

#Unintelligible shouting about artificial intelligence and... the shape of Erun's head?#

"Ha! You're a capsuleer Numen, just go learn it!"

#Are you ready to make your report now Erun?#

"Yeah, sorry, Numen is being a grump because I have him redoing his Planetary Interaction holdings again. I really don't know why he complains so much, I pay him market value for everything..."

"Right, well the conference was a blast, I got to see a lot of people and a lot of interesting projects being developed. I got to meet a few of the people making headlines in New Eden, like Max Singularity of the new Imperium. I also got to meet one of the nicest reformed pirates ever, Mynxee of the Signal Cartel. One of the people I rally enjoyed talking to was Mark726, who can be counted among the premier explorers and historians in the cluster."

"I was also able to take part in many panels where we were shown new technological improvements that will be changing how capital ships are used in New Eden. We'll be seeing an expansion of the modules that we can use on them, as well as new weapon systems that will be able to focus fire on smaller, sub capital size, targets. It will be nice to have a use for my dreadnought besides popping derelict POS's... #Or undocking just to mess with people# Or doing that yeah, as fun as it is. There have also been rumblings of even bigger things in development further down the line, but I've yet to hear anything really concrete."

#And your research into the Drifters this past week sir?#

"Oh yes! There is some really weird stuff buried deep in their wormholes! My research this week saw me join a group of many of the people I met at the conference. We explored a new artifact that was recently discovered by Makoto Priano of Itsukame-Zainou Hyperspatial Inquiries, who along with her corporation are some of the cluster's leading researchers of the Drifter's and their technology. The artifact she found was located deep within the Barbican Anoikis system, a system only reached by rare, well protected, wormholes. The word Barbican, from ancient Gallentean sources, is loosely translated to be the outer fortification of a city or castle. And the complex surrounding this site was certainly very well defended."

"I'll have Pali bring up a map of the Barbican complex while I explain how we proceeded to the artifact. #Pali projects the map on a nearby wall# Full documentation on the process of penetrating the complex was graciously provided by I-KAME. New corpmate Daaaain and I joined the fleet of primarily of Caracal Cruisers and Basilisk Logistics, each of us being assigned to one of the two wings needed to reach the focal point of the complex, the Hive. Daaain's group was tasked with the Alpha path and mine the Beta, good comms and excellent logistics work meant that we only ever lost a ship when we ran into a Drifter patrol. Each of our groups ran into a patrol on their way to the Hive, losing two damage dealing ships each, but luckily not our hackers. Many of us were carrying Mobile Depots and fittings just in case we had to pull double duty. Once both of our groups were in position our hackers attacked the gates leading further into the complex. This coordination was necessary as hacking our own gate unlocked the opposite wing's gate and vice versa. After engaging a small fleet of Sleeper battleships  our still considerable fleet emerged into the Hive facing another, larger force of Sleeper Battleships, and a powerful Drifter named Hikanta Tyrannos. His doomsday and subsequent reshipping efforts took three more of our ships, including Daaain's unfortunate Vexor, off the field before we finally cleared the area of hostiles." 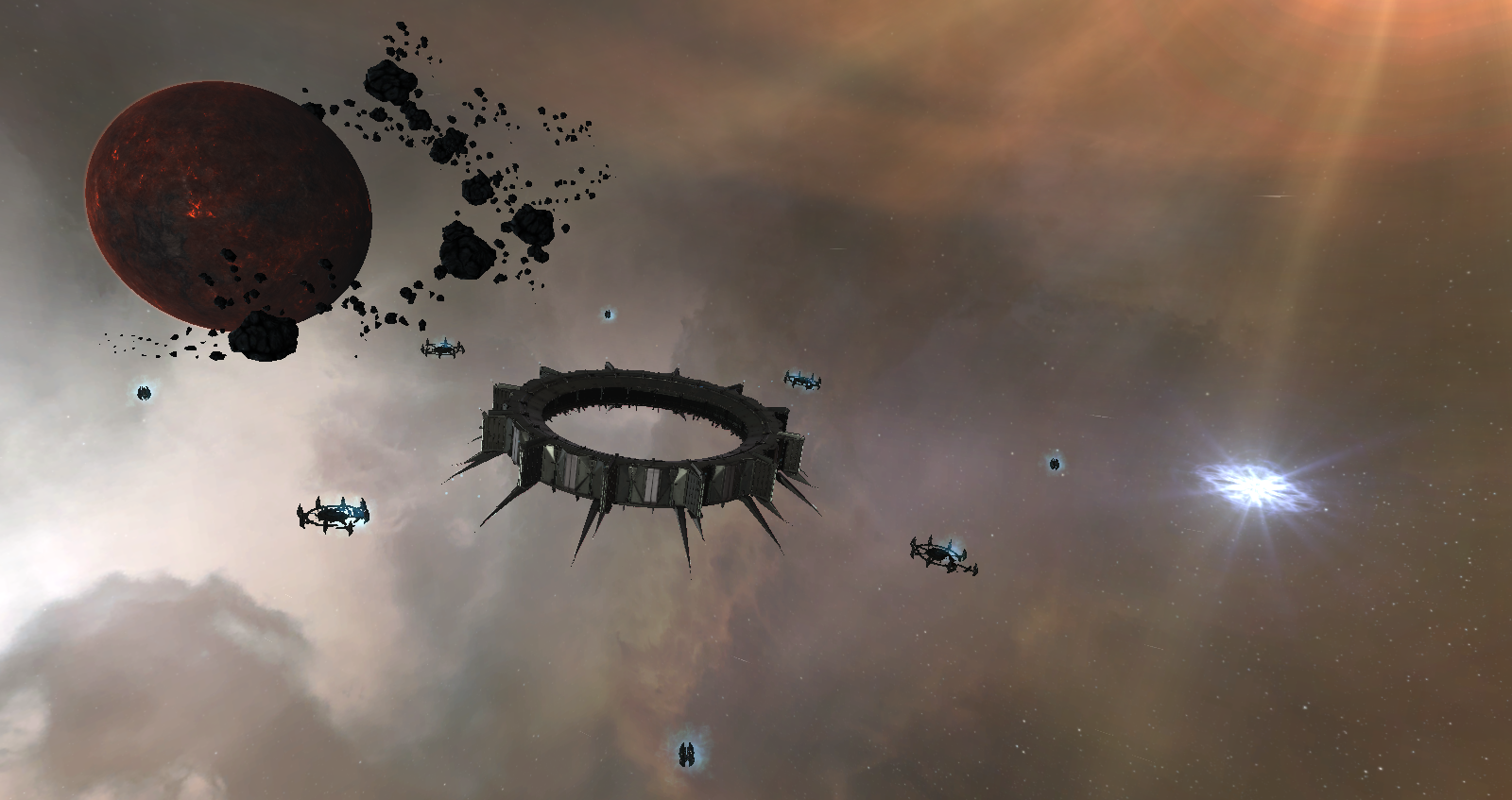 "At this point our fleet began to disperse, as the next leg of our journey required ships capable of traveling 10,000 kilometers at sub-light speeds within a reasonable time frame. Those of us continuing with the research mission bookmarked the Hive structure before heading out of Anoikis to grab faster ships. My first effort to bring an Anathema back in met with failure, as I was caught by a Sleeper patrol on my way back to the Hive. My second attempt I was able to get my cloak back online fast enough to evade them, and started making my way with the rest of the group towards our objective, halfway between the room where our combat groups first split, and the Hive around 20k kilometers away. Most of the ships the others had chosen were faster than my own, a paltry 2300 m/s compared to the fastest of our group, a Svipul clocking in at a blistering 11k m/s. Along the way we began to hear exclamations of shock and awe over fleet comms as the fastest among us began reaching the site. It wasn't until I arrived myself that I truly understood their emotional outbursts." 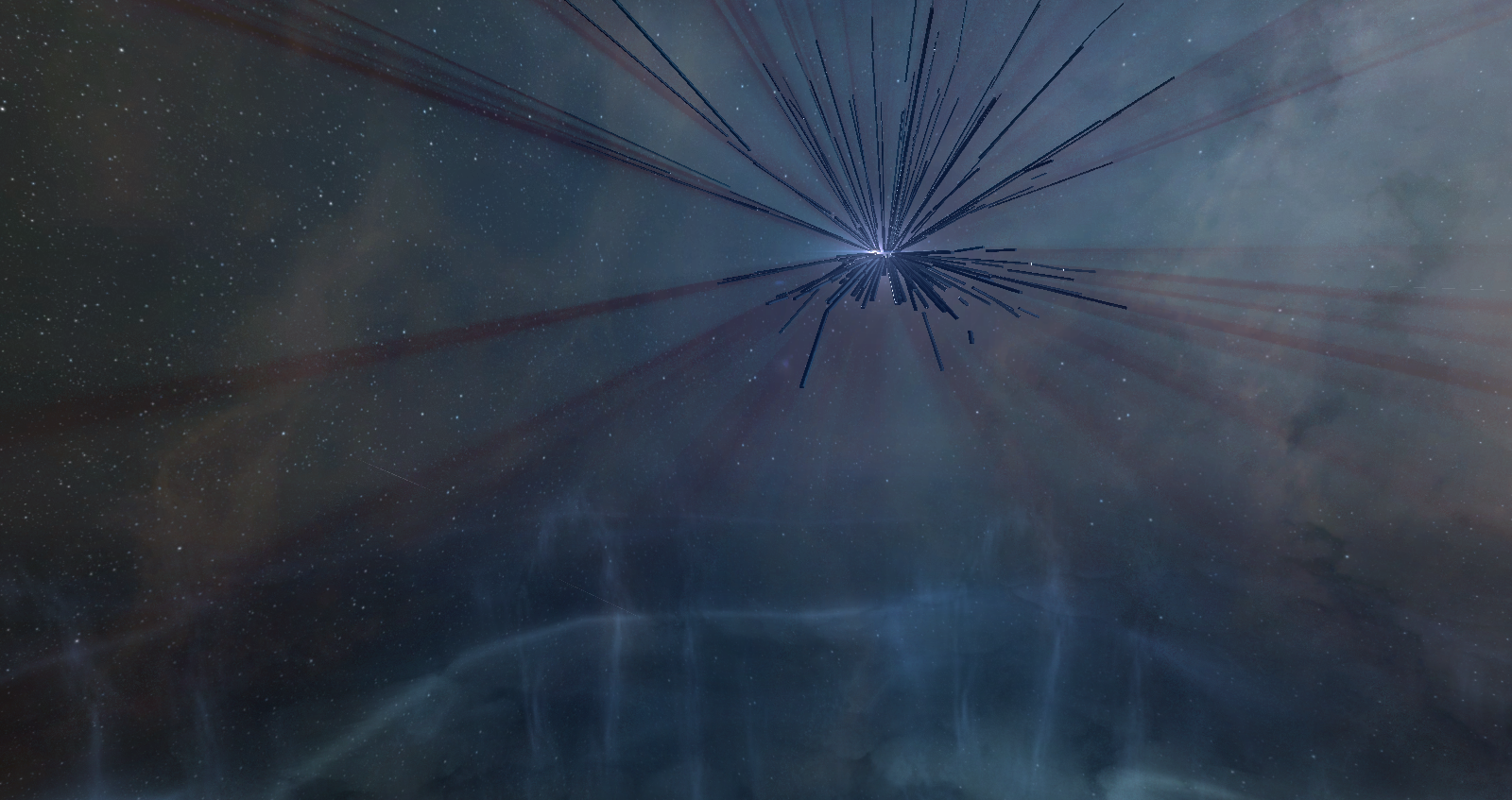 "The structure before me was massive, easily 200km from one end to the other. That was nothing however compared to the spacial phenomenon occurring around it." 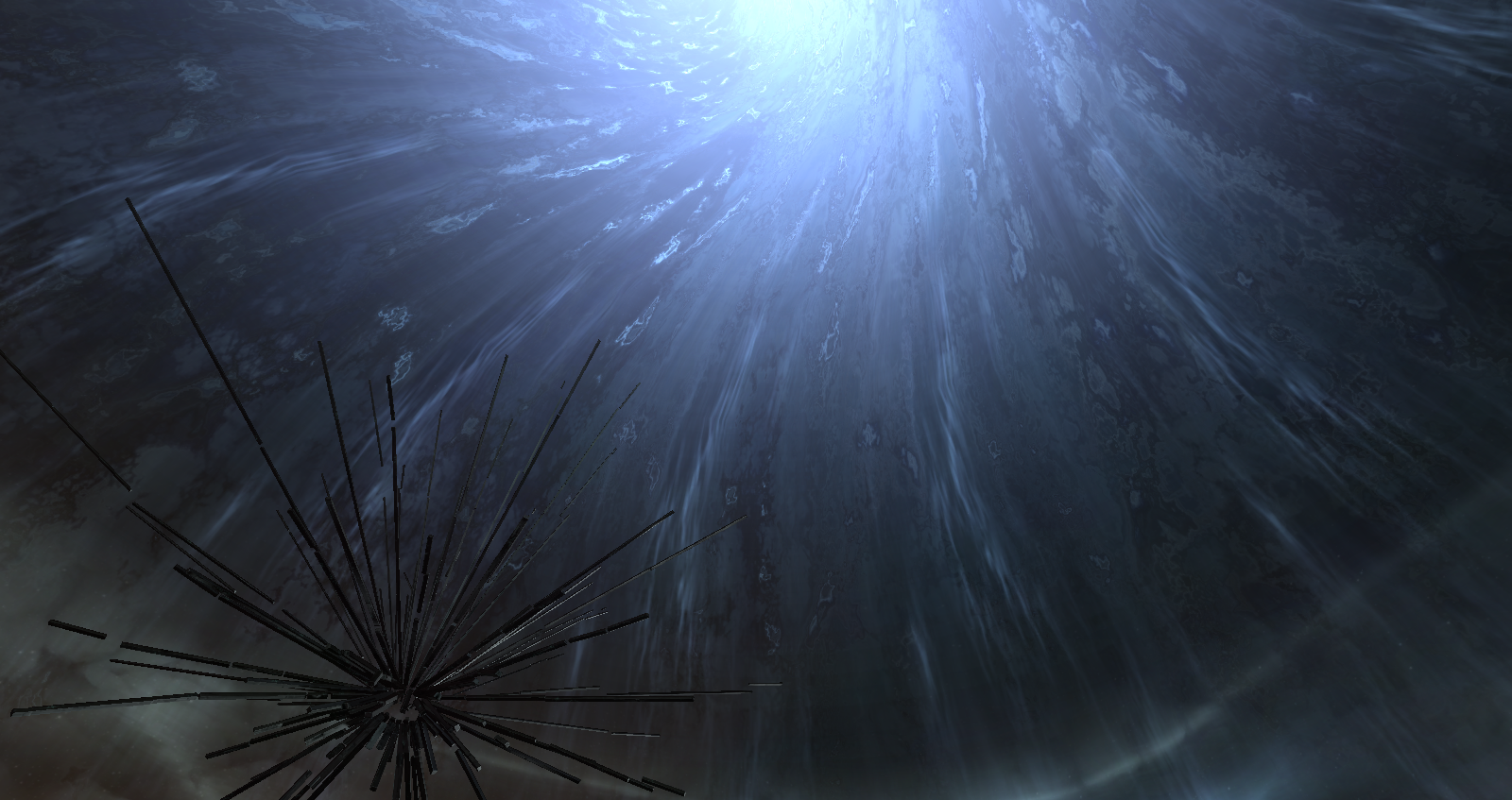 "Massive streams of luminous gas swirled into vortices both above and below the structure, with arcs of energy crackling throughout. I approached the structure warily before seeing several others of our research party had already penetrated deep into the starburst pattern of spires. Comms chatter began to pick up as numerous scientific instruments were brought to bear on the structure that had been gven the moniker, 'Barbican' according to the beacon on grid. The Barbican proved unresponsive to all forms of electronic intrusion we had available, up to and including the latest models of Entosis Links. Theories flew back and forth as we tried to ascertain what could have happened here and the original form of the Barbican itself. My own personal theory is that this starburst pattern is the result of the Barbican's former structure collapsing upon itself towards the single point we were currently observing. Others believed that the Barbican was built to look like this but that certain elements were missing, given some credence by the numerous broken and shattered spires we observed. Most of us stayed on site for several hours before we began to leave the system, with our research findings pouring through our data-banks and our minds."

"I've had a week to ponder my own findings and I stick by my idea that the Barbican we see today is the collapsed superstructure of of something larger. Further explorations by other research teams has found a similar structure within each of the other Drifter controlled Anoikis systems, though their purpose continues to elude us..."

"I can't help it! These are some of the deep mysteries of our times unraveling around us. I haven't been this excited about ancient artifacts and cultures since my early research into the Yan Jung archaeological sites out in Sinq Laison."

#Millions are dying as the Drifters are surging back into the Amarr Empire and you are more excited about research opportunities?"

#You are a horrible person sir!#

"What?! The more we know about the Drifters the more we can understand their motivation for attacking us, and the Amarr in particular. Seriously, the specifically targeted the Empress, taking her out in her Titan no less! Why would they do something like that? Besides there are pilots like my corpmate Daaaain out fighting the Drifters. He actually said they're going to crash the market for Antikythera Elements with the amount of Drifters they have been repelling. May actually be able to turn a profit on my Entosis Links now... Nah, probably not, besides I'd rather study the things myself..."

#Please tell me you are done sir#

"I find your flawed analysis of my psyche a constant source of amusement, but yes that's probably more than enough for today. Thanks Pali!"